As mentioned earlier, the bill of lading is very important and has many types. Here let me introduce a few useful classifications in practice for your reference:

1. According to the classification of the issuing party. The bill of lading issued by the carrier named MASTER B/L, and issued by the freight forwarder named HOUSE B/L. With the MASTER B/L, you can pick up the goods directly at the port of destination. If you take the HOUSE B/L, you must change the delivery order (for short D/O) firstly, when finished D/O we can arrange to pick up the process. 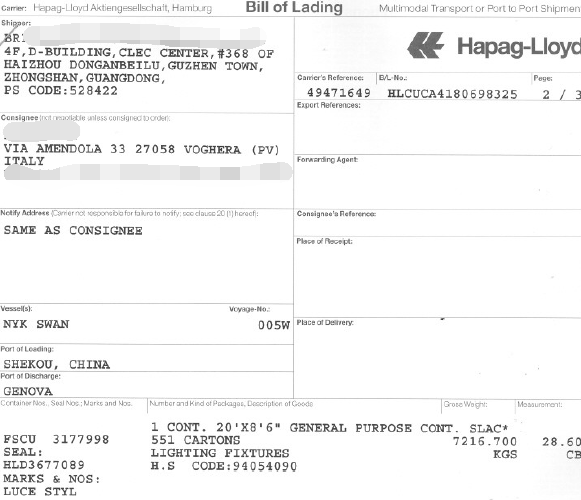 2. According to the classification of the consignee on the bill of lading. If the column directly fills in the consignee, it is called Straight B/L. If the consignee column fills "To the order" or "To order of XXXX", that is, "by the instruction" / "by the certain instruction", it is called Order B/L. The meaning of B/L is that the consignee is not restricted for the time being, and will be specified later (usually after receiving the payment). The B/L defines the consignee, only the mentioned consignee can pick up the goods, so this B/L cannot be transferred; But the Order B/L can be resold at any time by endorsement (endorsement, means the owner of the B/L signs and seals on the back of the B/L, it’s transferred, who takes the B/L who will be the owner of the goods. certainly, the consignor must the first endorser party).

In practice, straight B/L is more popular. Because for the exporter (usually the consignor), since this type of B/L is safe to get the goods payment, and for the importer, he can pick up cargo in a simple process. Of course, if the customer intends to pick up the goods at the beginning, normally he will ask for a straight B/L.

An important thing, since straight B/L restricted consignee, so in many countries, there is no need for an original B/L to pick up cargo, just a copy or even a copy and prove your identity as a consignee then can pick up the goods. In this condition, even you hold the original B/L in your hand, the goods are out of your control. Obviously, there is a big risk.

Because of such a big difference, whether or not the name is a key point in the selection and review of the B/L, the letter of credit must clearly indicate this in the terms of the B/L. Meanwhile, many foreign traders refuse to register the bill of lading when creating the letter of credit.

4. According to the complexity of the bill of lading, it is divided into a full B/L (Long Form B / L) and a short B/L (Short Form B / L). The full B/L details the respective rights and obligations between the carrier and the shipper on the back of the B/L; the short bill of lading only indicates the basic conditions of the goods carried and the name, address and consignee of the shipper. Occasionally, some cautious foreign trade associations specifically indicate that the use of short bills of lading is not allowed to emphasize the responsibility of the loan.